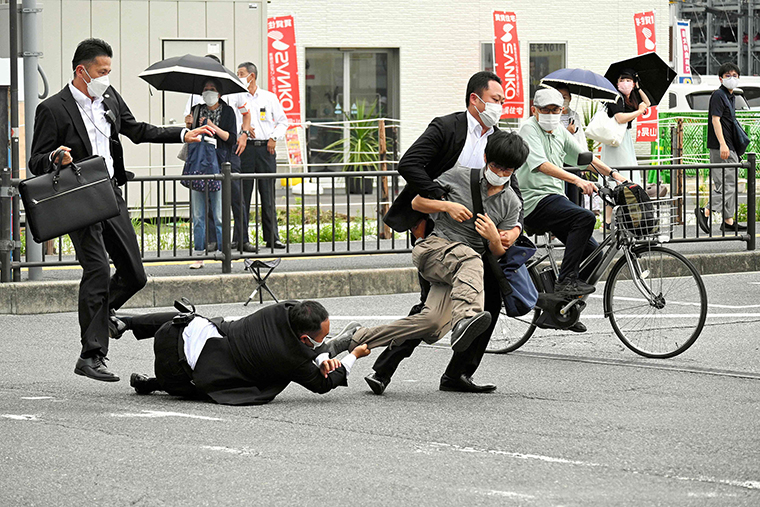 Police have launched a murder investigation into the assassination of former Japanese prime minister Shinzo Abe — but little is known about the suspect who was arrested at the scene of the fatal shooting on Friday.

Who is the suspect: Tetsuya Yamagami, 41, admitted to shooting Abe, Nara Nishi police said during a news conference on Friday. Yamagami, who is unemployed, told investigators he holds hatred toward a certain group that he thought Abe was linked to. Police have not named the group.

What kind of gun was fired: The suspect used a homemade gun in the shooting, police said, and images from the scene showed what appeared to be a weapon with two cylindrical metal barrels wrapped in black tape. Authorities later confiscated several handmade pistol-like items from the suspect’s apartment.

The weapon was a gun-like item that measured 40 centimeters (about 16 inches) long and 20 centimeters wide, police said.

Yamagami made multiple types of guns with iron pipes that were wrapped in adhesive tape, Japan’s public broadcaster NHK reported, citing the police. The police found guns with three, five, and six iron pipes as barrels.

The suspect inserted bullets in the pipe, which he had bought parts for online, police said, according to NHK. Police believe the suspect used the strongest weapon he made in the assassination, NHK added.

Security probe: Japan’s National Police Agency said it will review security arrangements put in place before Friday’s shooting, according to NHK. Security was being handled by Nara prefectural police, which drew up a security plan for the former prime minister while he was in the city.

The agency said several dozen officers and security personnel from the Tokyo Metropolitan police were on duty and had reportedly watched Abe from all sides during his speech, NHK said.