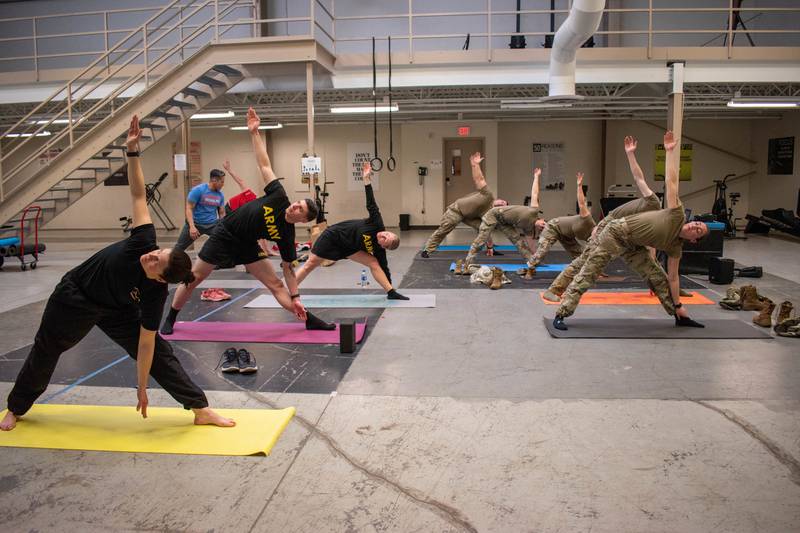 The Army has adopted an all-around health program that targets a range of areas, including mental, spiritual and physical health. The Holistic Health and Fitness, or H2F, program aims to take the best of current mental and physical health science to improve the condition of soldiers across the force.

But this isn’t the first time, by far, that the service has looked for ways to better mold soldiers for the rigors of modern battle.

Gatzemeyer was commissioned out of the U.S. Military Academy at West Point in 2007, and later taught history there as an assistant professor from 2016 to 2019. Like soldiers everywhere, Gatzemeyer did his dose of calisthenics without fail when he hit the regular Army.

And, like many in uniform over the past century, he had a limited understanding of how the Army produced those bodyweight physical routines, its run distance and other measures of fitness.

As the service began revamping its protocols with combat fitness tests and other ways to keep soldiers in fighting shape, the Fruitland, Idaho, native was leafing through old Army manuals as he sought a dissertation topic while working on his doctoral degree at the University of Kansas.

The old physical training manuals from the 1920s and 1940s drew his attention.

“The language was really rich and interesting,” Gatzemeyer told Army Times. “And in many ways, the PT manuals felt really, really familiar to me as an Army officer.”

The pages, which dated to the pre-World War II era, had instructions on how to do burpees and a series of drills that soldiers had performed for generations.

That finding and a few more years of research led Gatzemeyer to draft his dissertation, obtain his doctoral degree and publish “Bodies for Battle.”

The first lesson for today’s soldiers: What you do now has an origin story, and PT wasn’t always the way it is now.

Gatzemeyer talked to Army Times recently about his findings. The interview was edited for length and clarity.

Q: Young students can ignore history. But there are cultural aspects in the military on how leaders and troops view physical fitness. What did you notice while you were researching that stood out?

A: That was about the time, mid-2015 to 2016, that the Army was working itself away from the Army Physical Fitness Test and moving toward what became the Army Combat Fitness Test. The study for what comes next had just concluded and one of the findings in the study was that the Army should reduce its run to 1.5 miles down from the 2-mile run, because science indicated that was the optimal distance to test cardiovascular fitness. I remember reading that the sergeant major of the Army wanted that overruled because, he said, that last half mile tested your spirit and your heart.

I was reading these old manuals at the time, and I said, there’s clearly more to fitness than just measures of physiological performance, given the sergeant major’s comments and then kind of reflecting on my own experience with how we associate good leaders or good soldiers with high PT scores.

Q: On the civilian side, fitness goes through various trends and fads. From the jogging-centric 1970s to the bodybuilding craze of the 1980s and 90s and even CrossFit in recent decades. Has the Army seen such shifts?

A: Early in the period of my research I saw a tug-of-war in Army leadership, mostly at West Point, between cavalry, drill, organized sport and later systematic group exercise. And the science was just emerging. It was not just exercise for exercise’s sake. People are starting to learn that if you repeatedly work a muscle, for instance, that muscle can become larger or stronger and capable of carrying more weight. But they’re also trying to apply that concept more broadly and in an educative sense. So, they make connections between physical and bodily health and things like mental health, social well-being and morality.

The beginning of my research, the late 1800s to the early 1900s is also the Progressive Era. That’s when many people were looking to scientific methods to improve society, hygiene and community planning to make better citizens. The question they were asking was what the physical training was supposed to produce. Some saw it as simply a matter of becoming better horsemen, better at drill and other soldier tasks. That fit the tactics of the time, which required discipline and obedience. But some saw athletics to both improve fitness and create teamwork. But sport often meant injuries and often a focus on the talented star athletes on one team, instead of total force fitness development.

Q: It’d be easy to see how some thought that combat-focused physical training was the priority, especially in the more physically demanding era of early 1900s soldiering. Was that always the case?

A: The Army’s physical culture didn’t start with training for specific skills or tasks. It was a little bit more abstract. It was about training the soldier and cultivating some characteristics that would be useful on the battlefield but not translate directly. So, they’re not, for instance, teaching grappling or combatives in this early period of the 1880s-1890s. But they are doing things to instill discipline and making a unit work well together.

Q: Much of physical fitness and physical culture came from a variety of other sources. How did the Army bring that knowledge into the force?

A: A lot of it was up to the individual unit commander to create. Then, with the rapid increase in the size of the Army for World War I and World War II, the force needed a more uniform way to bring all soldiers up to a standard. The Army just didn’t have the depth and breadth of expertise among its physical trainers at that time. So, they had to turn to civilians and bring in experts from the outside. The institute was forced, in a way, to accept this outside advice and cede some of that territory. But, when the demands were gone, after the two world wars, military leadership took back more control and you see more of the traditional culture reemerge.

Q: You covered a lot of events in your book, from 1885 through 1957. Why did you pick those as the starting and ending points?

A: Within the Army, physical training began gaining traction after 1885 and physical educators took a major step forward, more broadly, with the founding of the American Association for the Advancement of Physical Education at that time. There are three evolutionary periods for the Army’s physical culture between 1885 and 1957; the “disciplinary era” led by Herman Koehler, Master of the Sword at West Point; the “combat-readiness interregnum of 1917-1919; and the rise of the scientific measurement school of thought after 1942. In 1957, the debate between drill and sport and systematic training had essentially ended, and Army leaders in a conference that year brought together all the leading physical fitness experts, establishing a doctrine and culture that is like what the Army has today. At that conference, for the first time since 1885, you don’t see any question anymore that systematic training is valuable. A lot of it feels like consensus when you read the conference report about what the Army should be doing in terms of exercise and a daily routine for soldiers.

Q: What did you draw from your historical work that’s applicable in thinking about soldier fitness today?

And it absolutely continues today. There is good evidence that Americans’ bodies are changing. I know it concerns a lot of people who are thinking on its national security implications. But one thing I can derive from looking at the past century of physical fitness in the Army is that generations tend to rise to the occasions; and the standards by which we measure people in peacetime, when we can afford to be very selective, change in wartime. Physical standards by which we measure the quality of a soldier, are all malleable, those standards are not set precisely down in stone. So, as military service changes, the character of combat evolves, and perhaps our definitions of physical fitness can also evolve alongside that. There is a lot to think about. For instance, when Space Force is standing up and thinking about what it wants its physical culture to look like, there are some big questions to ask.

Todd South has written about crime, courts, government and the military for multiple publications since 2004 and was named a 2014 Pulitzer finalist for a co-written project on witness intimidation. Todd is a Marine veteran of the Iraq War.