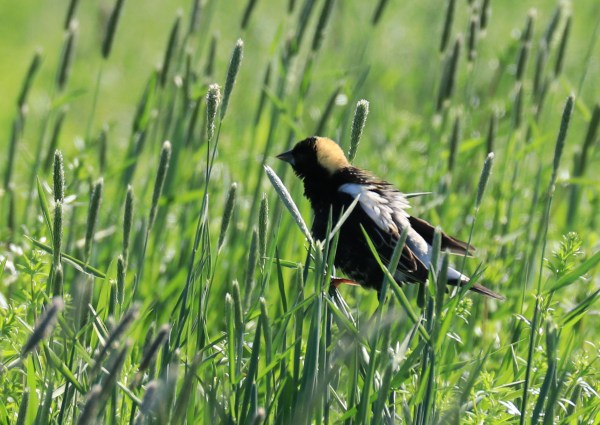 Migration is underway. Birds have started to trickle out of Maine. Over the next two weeks, the trickle will become a torrent. Where will they all go?

Good question. Birds are disappearing from the planet at an alarming rate. In North America alone, nearly three billion birds have vanished in the last 50 years.

Collisions with manmade structures and predation by outdoor cats account for much of the decline, but habitat loss is probably the leading cause. For migrating species, both their summer and winter habitats must be conserved, if we are to slow the trend.

That is how Emily Filiberti found herself interning at a nature preserve in Jamaica a few years ago. Filiberti is now a graduate student at the University of Maine. She spent this summer in Wisconsin tracking golden-winged warblers, a species that is disappearing even faster than most other birds. That’s where she made an astonishing discovery.

Last spring, Filiberti and her crew captured some of the golden-winged warblers in the research area and outfitted them with Nano Tags. These tiny transmitters are part of the Motus Wildlife Tracking System, a technology less than a decade old that takes advantage of miniaturized electronics. The transmitters are so small, they can be attached to butterflies.

Suddenly, the receiving station picked up the signal of a different species, a female American redstart that had been tagged in Jamaica. In fact, it had been tagged two months earlier by her former supervisor, in the exact same spot where Filiberti had studied.

Eight days later, the station picked up the signal again. This bird was not just passing through. It was likely nesting. Using a handheld antenna and immense patience, Filiberti managed to track the redstart to its nest, and even peek at two speckled eggs during a moment when the bird went out for a snack.

So, there it was, an individual bird whose exact winter and summer territories were known — 2,000 miles apart. The odds against such a discovery are incalculable.

First, redstarts have one of the widest breeding ranges of any warbler in North America, stretching westward across the continent from Newfoundland to British Columbia, and southward nearly to the Gulf Coast. That’s a lot of real estate. Second, migration is dangerous. Many birds don’t survive the journey at all. Third, how often can it possibly happen that the same researcher has studied both sites on each end of the migration?

Amber Roth is Filiberti’s advisor at the university. Amber is using the Motus technology to study some of Maine’s most vulnerable species.

Grassland birds are in precipitous decline. When bobolinks leave Maine fields, they migrate all the way to the grasslands of Argentina. The signal from one tagged bobolink was picked up on 13 different stations during its journey south. The bird disappeared when it crossed the Caribbean, but the signal pinged again when it made landfall in Colombia.

This kind of tracking boosts the ability of scientists to follow bird populations. Every field guide exhibits range maps for each species, showing the full of expanse of where the birds breed, migrate, and winter.

What the books don’t show is that different geographic populations migrate to different places. For instance, East Coast birds might winter in the Caribbean islands, while West Coast birds head for Central America. Knowing such details improves our chances of conserving particularly important bird areas.

We can also track the migration patterns of males, females and fledglings to see if there are any significant differences. Such differences are particularly noticeable in certain species.

For instance, adult male shorebirds typically leave their breeding grounds before the females, who then depart before the youngsters.

As one might expect with a transmitter so tiny, the signal is not strong. A tagged bird must be within 15 kilometers of the receiving station to be picked up, and much closer if hills and trees get in the way. Over short ranges, biologists can use a handheld antenna to locate a stationary bird, as Filiberti did.

How exciting it will be if this little redstart makes it back to Jamaica and pings the station upon arrival! We’re cheering for it.

More articles from the BDN