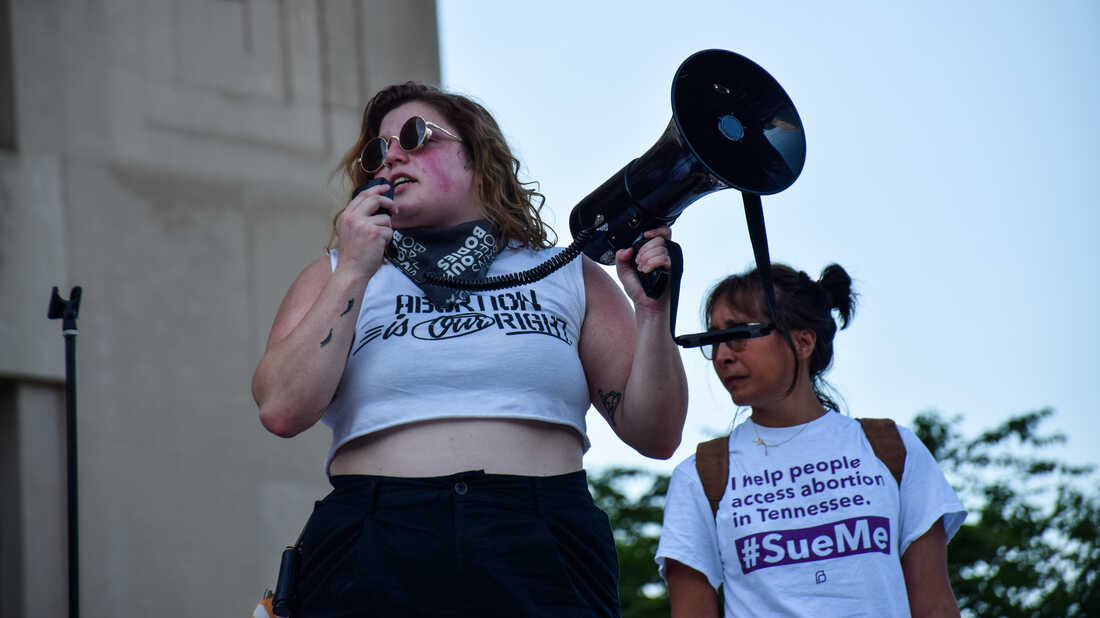 Julie Edwards, a patient advocacy program manager with Planned Parenthood of Tennessee and North Mississippi, had a self-managed abortion as a teenager and said they will become more common and can be safe.

Julie Edwards, a patient advocacy program manager with Planned Parenthood of Tennessee and North Mississippi, had a self-managed abortion as a teenager and said they will become more common and can be safe.

At a rally in Nashville, Planned Parenthood organizer Julie Edwards looked out at some of the “back alley abortion” imagery on signs, including bloody coat hangers. But, Edwards told the crowd, driven into the streets by the U.S. Supreme Court’s decision on abortion rights, it’s not like the old days before Roe v. Wade.

Nearly a decade ago, Edwards was a teenager and got medication from some older friends. Edwards said that may be the new normal in abortion-ban states like Tennessee.

The regimen involves two prescription drugs that hit the market since Roe was decided in 1973. Mifepristone is taken first. It’s the abortion drug that’s fairly expensive and highly regulated, usually taken at the doctor’s office or health clinic. A day or two later, the patient takes misoprostol, which is much more widely available and can work on its own to induce an abortion. The drug was developed for treating ulcers in the 1970s but has several other off-label uses aside from abortions, such as alleviating arthritis. It’s even prescribed for animals, so veterinary supply stores carry the medication. Misoprostol is even sold over-the-counter in Mexico.

“It’s really based on what somebody can get. And in the self-managed context, the only way to get mifepristone plus misoprostol is through the internet, so it takes time to wait for the delivery,” said Susan Yanow, spokesperson for Women Help Women, a nonprofit based across four continents that works to increase access to abortion.

The international organization ships both medications all over the world — but not to the U.S. because laws vary so much state to state. Social media sites such as Facebook and Instagram have already started pulling down posts offering to send these drugs by mail. Many states that now ban abortion have recently strengthened their laws on mail-order abortion drugs.

“We still have the right to share information,” Yanow said. “People use the internet. People use their phones. People will find ways to obtain these pills.”

But it’s more than finding the medications, which is why Yanow’s organization has a detailed guide on how to use them safely. And she provides training for local reproductive rights groups, as do others.

Lynsey Bee of Self-Guided Abortion, based in Montana, began producing video tutorials late last year and publishing them on Youtube, explaining how to use misoprostol alone and offering ways to make the process more sacred by building an altar, burning incense and lighting candles. She even provides post-abortion yoga instruction.

With misoprostol alone, multiple rounds are needed. Nausea is common. And the medicine induces cramping and bleeding that can be alarming for those who aren’t prepared.

Even some OB-GYNs are quietly supportive of self-managed abortion.

“I’m more worried about people who can’t get to one of these sources and are just so desperate that they take matters into their own hands,” said Dr. Nikki Zite, an OB-GYN at the University of Tennessee Medical Center in Knoxville.

She said clinical counseling before taking the pill combo is ideal. For example, some patients are anemic and could bleed enough to need emergency care. And some just don’t do well with pain and lots of blood.

“Not every patient is a good candidate to miscarry at home,” she said.

But at this point, Zite can’t afford to provide that consultation. In Tennessee, she would be risking a felony and prison time under a six-week ban now in effect, and an all-out abortion ban set to take effect in August. And it’s unclear just how far law enforcement is willing to reach.

References to coat hangers have been used to protest the decision to overturn Roe v. Wade. Abortion rights activists say “self-managed abortions” are much safer today because of medications — but women still need guidance.

References to coat hangers have been used to protest the decision to overturn Roe v. Wade. Abortion rights activists say “self-managed abortions” are much safer today because of medications — but women still need guidance.

“I mean, that is fraught with peril,” Raybin said. “I would strongly recommend against a woman using such quote-unquote underground methods to get medication like that.”

He said it’s best to get a legal abortion in another state. But abortion rights activists in Tennessee say they know travel will be difficult for many. And even for those who can, a self-managed abortion may be more convenient. To a degree, reproductive rights groups are willing to help navigate the legal gray area.

“We recommend that if someone is self-managing an abortion that they have a supporter or friend. That supporter or friend may be at a higher legal risk than the actual person who is self-managing an abortion,” she said. “And then you have to decide for yourself — is that something I’m comfortable with? Is that something I’m not comfortable with?”

Organizations in states with abortion bans have their own risk to assess. They feel confident the First Amendment protects sharing medical information endorsed by the World Health Organization.

But abortion rights advocates are torn between raising awareness and becoming a target for anti-abortion lawmakers — who are no longer limited by Roe v. Wade.

“We definitely are concerned about increasing criminalization of abortion or self-managed abortion and abortion pills,” Gurak said. “We also want to balance that with the need for communities to have the information that they need to make the decision for themselves.”