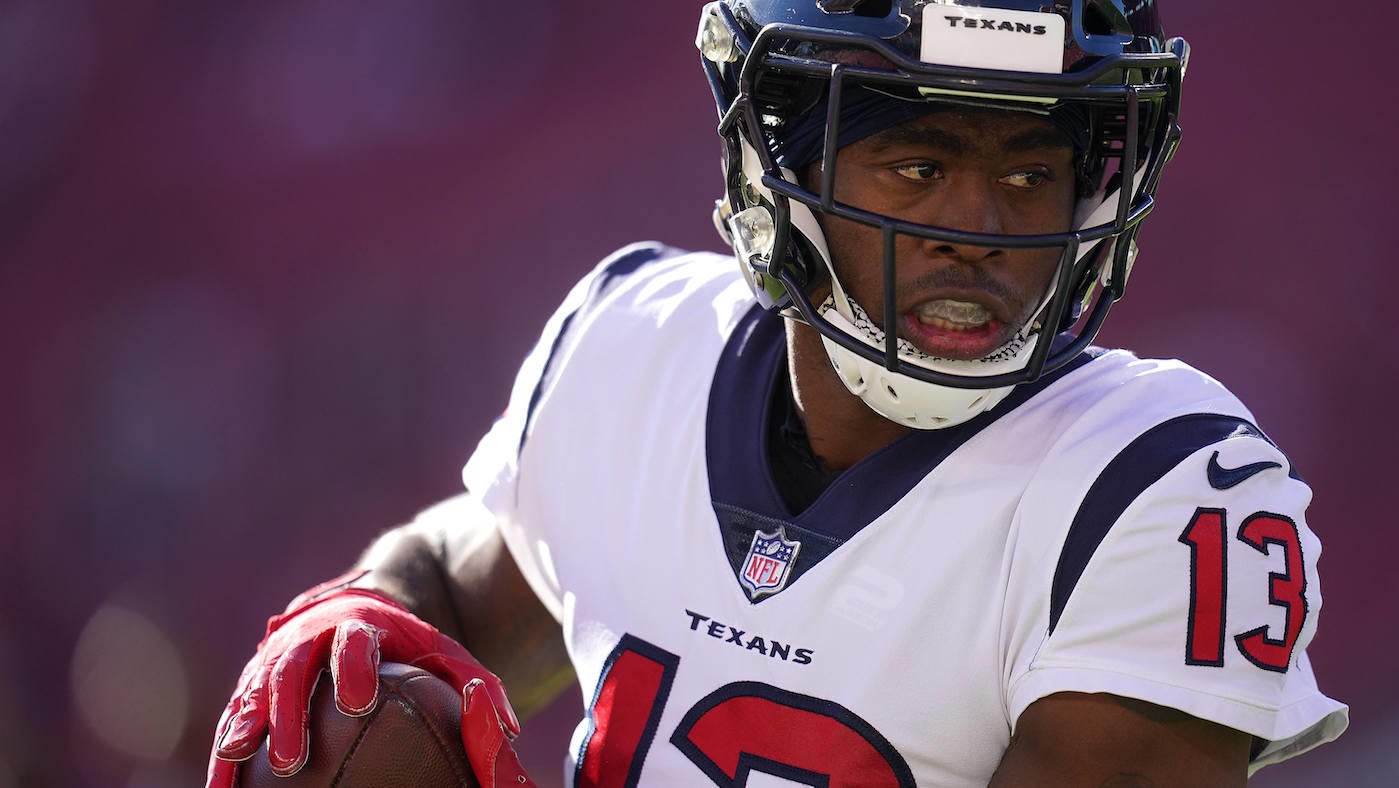 The 2022 NFL trade deadline is fast approaching on Nov. 1. Some teams are already squarely in the “buyers” camp, with the Rams and 49ers reportedly bidding over Christian McCaffrey before the latter acquired the star running back. Others, like the Panthers, are already confirmed as sellers. But all 32 teams could use some degree of tweaking.

With that in mind, here are 32 different trade possibilities — one potential addition or subtraction for every team:

The former Pro Bowler wouldn’t fetch more than a late-round pick as a rental on his last legs, but he’s got no tangible role in a receiving corps that has DeAndre Hopkins back in action, even with Marquise Brown sidelined. Arizona needs to be in the business of parting with more aging starters, not pursuing them.

The former first-rounder’s price tag should be low thanks to an underwhelming run in Vegas, and the Falcons, sneakily competitive in the NFC South, are still sorely lacking in the pass rush department. Maybe a change of scenery would allow the Clemson product to land a modest deal and stick in Atlanta beyond 2022.

Carolina shouldn’t — and likely won’t — trade its No. 1 target, but that doesn’t mean the Ravens shouldn’t try their darndest. Besides Moore’s local ties, coming out of Maryland, he would instantly give Lamar Jackson the best all-around receiver of the MVP QB’s career, helping propel an erratic aerial attack that lacks a true alpha out wide.

They couldn’t land Christian McCaffrey, but Gibson would be a solid consolation prize as a dual threat with starting-caliber stuff. Still playing second fiddle to Brian Robinson Jr. in Washington, he should be available as a plug-and-play complement to Devin Singletary. As a bonus, he’s signed through 2023.

They should hold onto their young building blocks, including D.J. Moore and Brian Burns, but the defense has enough of them (see: Derrick Brown, Jaycee Horn, etc.) to warrant shopping Thompson before the former first-rounder is due a whopping $24 million in 2023, the final year of his extension.

Now that they’ve done what they should’ve done months ago in dealing Robert Quinn, it’s time to auction off his running mate in the front seven, who was visibly saddened by Quinn’s Wednesday departure. Yes, Smith is the heart of their “D,” but he’s headed for 2023 free agency and probably ready for greener pastures, and he’ll surely collect an even bigger haul for Chicago’s rebuild.

Joe Burrow is surging, but their defense could use reinforcements up front, where D.J. Reader is sidelined indefinitely and a banged-up Trey Hendrickson needs help off the edge. Adding Payne wouldn’t be cheap in terms of either compensation or an inevitable extension, and they already have lots of money tied up at his spot, but you can never be deep enough in the trenches.

He’s an elite No. 2 back, but it’s Nick Chubb’s show, making Hunt a virtual shoo-in to leave via 2023 free agency anyway. With D’Ernest Johnson still in tow as a capable complement, they should get a head start on adding picks as they spiral toward a non-playoff season in their first year of the Deshaun Watson gamble.

A bigger splash would be fun for America’s Team, but how about a plug-and-play depth piece for the defensive front, which could use some interior help for a likely playoff run? Ioannidis is on a contract year in Carolina after six solid years in Washington. You could do a lot worse in terms of rentals with experience.

Even after his official return to the starting lineup, he’s an outcast in Nathaniel Hackett’s listless offense. More importantly, he’s a 29-year-old running back approaching free agency. In other words, Denver should happily take whatever it can get for the vet while preparing for potentially massive changes after the season.

The former Packers veteran brings some spice to the backfield and has been getting more work with D’Andre Swift injured, but he’s on the final year of his contract for a team at least another year away from competing. There’s little reason not to shop him; he’d make a fine secondary piece for a contender.

This is the second year in a row we’ve tabbed Cooks as an ideal target for Green Bay, but he’s even more necessary this time, with Aaron Rodgers desperate for any proven pass catcher, let alone one capable of bursting downfield. Jerry Jeudy would be a more intriguing long-term play if the Broncos entertain offers, but Cooks is a quick learner who could instantly add speed to the Packers’ slumping offense.

Lovie Smith’s team has been relatively competitive in ugly games, but the defense primarily remains a sieve, and Grugier-Hill could offer some value to a team hungry for starting experience at the position. He’s athletic but doesn’t warrant their long-term investment and will be hitting free agency after the year.

We’re tempted to say Matt Ryan, whose battered body has now been indefinitely relegated to the bench. But considering they might accidentally stay in the playoff picture, who’s to say he won’t make a surprise return late in the year? Ngakoue, meanwhile, no stranger to being dealt, is on a contract year; and they could use all the picks they can get for their next QB makeover.

Investing in Trevor Lawrence’s continued development is paramount, and Jones is a respected member of their restocked WR corps, but he’s their No. 4 target halfway through the final year of his contract, with Christian Kirk and Zay Jones locked into longer-term roles. Doug Pederson can afford to auction him off and feed Travis Etienne even more.

An all-time Saint, the perennial Pro Bowler wouldn’t be available without a huge push, but with New Orleans in dire need of both cash and picks, it’d be worth the Chiefs’ effort to give Chris Jones another relentless running mate for their title bid. Though pricey, Jordan would make for a Von Miller-esque addition down the stretch.

No one’s gonna pay close to a premium for a box safety approaching free agency, but Abram, 26, hasn’t been in their long-term plans for a while, and perhaps a contender could find use for him in more of a hybrid, hard-hitting role.

Embattled big-money starter J.C. Jackson is out for the year, threatening the corner depth of an already-porous defense. Michael Davis may be an experienced fill-in opposite Asante Samuel Jr., but Jones, who’s lost snaps in Seattle, would at least give them added insurance as they fight to remain in the AFC West race.

Inactive for New England on Monday, Wynn has struggled since moving to right tackle, but he’s got flexibility to play multiple spots, and Matthew Stafford badly needs more protection up front. With Van Jefferson mending and Odell Beckham Jr. still a late-year possibility, O-line is the priority. The Pats should be willing to deal, with Wynn on his contract year.

Safety Brandon Jones is headed to injured reserve, and corner Byron Jones remains sidelined, so the time is now for Miami to bolster depth on the back end, especially if the Dolphins intend to stay in the AFC East race. Elliott has been solid in his time with Detroit after four years in Baltimore, and the Lions should be motivated to sell.

A splashier move on offense (tight end?) might help Kevin O’Connell’s squad take it to the next level, but Hall, who’s fallen on the depth chart for a rising Jets defense thanks largely to “Sauce” Gardner, would fill a more immediate need. The Vikings could use help at corner, particularly in the slot, and he’d be a potential long-term bet for Kwesi Adofo-Mensah.

Inactive Monday and regularly on the fringe of a deep WR corps headlined by Jakobi Meyers and DeVante Parker, Bourne’s versatility should appeal to a contender desperate for pass-catching help. He’s also on a reasonable contract. New England won’t give up on the year, but with Nelson Agholor and Tyquan Thornton also in town, Bourne is expendable.

To be honest, they should be willing to take offers on anyone. Landry, approaching 30 with an injury history, isn’t likely to command much of anything, but his experience could draw interest from playoff hopefuls. It’s not likely New Orleans will be counting on him beyond 2022, with Chris Olave headlining the position.

Denver shouldn’t necessarily be motivated to sell Jeudy just two years after drafting him 15th overall, but New York owes itself the phone call, now that Brian Daboll has proven, even without a legit WR, he can shepherd Daniel Jones and Saquon Barkley to consistent situational success. Jeudy would instantly become their top pass catcher, and potentially for the long haul.

If you’re not gonna use him, why keep him? The former second-rounder finally made his 2022 debut with Elijah Moore benched in Week 8, but his upside as a downfield threat would be better tapped elsewhere. With Garrett Wilson and Corey Davis atop the depth chart, they don’t have much reason to sit on his rookie deal for another year-plus.

They already added C.J. Gardner-Johnson, and Marcus Epps is a quality complement on the back end. Where Gardner-Johnson is a ballhawk, however, the Philly native Clark could offer hard hitting and blitzing ability as a third safety for the stretch run. Signed through 2023, he’s no longer an asset in Baltimore with Marcus Williams and Kyle Hamilton in town.

It’s Kenny Pickett’s time, and Mitchell Trubisky is a solid emergency option behind him. There’s just no longer any need for Rudolph to stick around, whereas a team bound for a 2023 QB competition (Washington? Detroit?) might want the flyer.

Between Talanoa Hufanga, Jimmie Ward and Tashaun Gipson, their defense is set on the back end. Moore, meanwhile, a 2018 third-rounder who once picked off Patrick Mahomes in the Super Bowl, might help them recoup a pick from their big Christian McCaffrey trade.

Chicago will be hesitant to deal the heart of its defense, especially after he helped lead an upset of the Patriots in prime time, but he’s still headed for a monster payday via free agency after failing to strike a long-term deal and requesting a relocation. Seattle, never afraid to swing big for defensive stars, could use a thumper for a potential surprise playoff run.

The Bucs’ problems run much deeper than the personnel; they already have elite skill talent for Tom Brady. But more help for the QB couldn’t hurt, and the one spot that’s lacked killer production, formerly occupied by Rob Gronkowski, would get a major boost with Gesicki, who feels like a prime candidate to bolt Miami for better pass-catching opportunities in 2023.

Their draft-day gamble to essentially swap A.J. Brown for Treylon Burks has yet to pan out, and while their offense still runs through Derrick Henry, getting a true No. 1-caliber wideout could help both now and later. If they were to pry the unhappy Moore from New York, they’d be assisting whomever is under center in 2023 and beyond.

Or, just about anyone. William Jackson III is another name bandied about as a trade chip, and he and Fuller are in the same boat: overpaid, underperforming corners whose experience might be enough to convince a needy contender to part with a late-round pick.